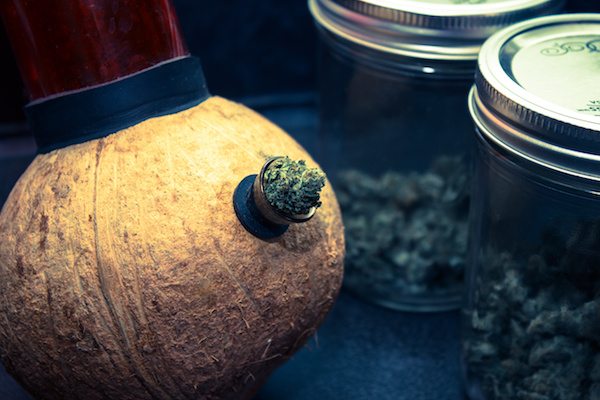 Don’t have a pipe handy? Don’t want to roll a joint? As long as you have a few simple tools around, you’re in luck. Making a bong is a quick and straightforward undertaking. And if you’re into crafts, it can be fun, too. Here’s how to make your own bong.

If you have a metal socket lying around, that pretty much makes the ultimate DIY bowl. You can place weed in the large opening and connect it to the device you’ll be using as a chamber for your bong. If you don’t have a socket, you can always use a paperclip. Uncoil it, then recoil it into a small spiral. You can stick a nug on one end and feed the other end into your chamber.

Next, Find a Chamber

This can be almost anything. The only limit to what you can turn into a bong is your own imagination. A household item you probably have lying around that is often turned into a bong chamber is a plastic bottle. Make a small hole in the bottle that the socket (or other bowl object) can snugly fit into and stick it in. Presto! You’ve got a bong.

A lot of people like to make bongs out of food matter. One common choice is an apple. You can use a corer and a knife to make an airway that goes from the top of the apple out through one of the sides (forming a 90° angle). Stick your socket (or whatever you’re using for a bowl) in the top and inhale through the side. When you’re done getting high and you’ve got the munchies, you can take a bite out of your bong!

Now that you know how to make your own bong, what are you waiting for? It’s time to smoke up!

What are you going to make a bong out of? Let us know in the comments below?