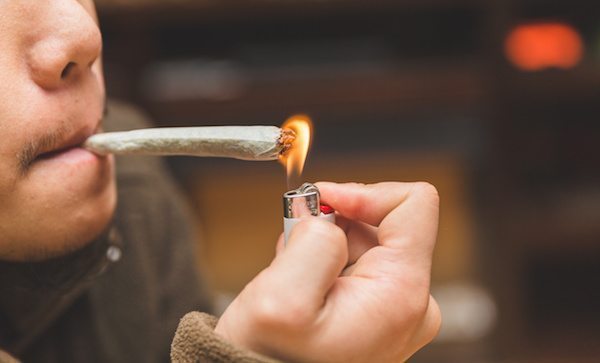 Charlize Theron has been out of the closet as a weed smoker for a while now. In 2001, the National Enquirer published a photo spread of her at a party puffing from an apple bong! A lot of celebrities smoke weed, but not many make their own biodegradable, edible bong. Extra points to Charlize for creativity and environmental consciousness.

Jon Stewart is certainly no stranger to marijuana. In addition to being a recreational user, he was known as a pro-marijuana advocate during his tenure as host of The Daily Show, where he’d frequently take on the deluded anti-marijuana propaganda of conservative pundits. Fun fact: he had a special guest appearance as the “enhancement smoker” in Half Baked, which made our list of top 5 classic stoner comedies.

Bill Clinton might not have inhaled, but Barack Obama sure did. Before he was POTUS 44, a young Barry used to like to get high with his schoolmates in Honolulu. In fact, he and his friends even referred to themselves as Choom Gang (choom being Hawaiian slang for smoking weed). Don’t you wish this guy were still President?

The flashy songstress, like many talented artists, has found that she writes better when she’s high. She also uses marijuana medicinally, admitting in an interview that she smoked 15 joints every day while recovering from a painful surgery. Ain’t nothing wrong with that!

This man is hardly a surprising entry, seeing as he hails from what very well might be the pot capital of the Anglophone world, Vancouver. In addition to starring in stoner comedies like Pineapple Express, Knocked Up, and The Green Hornet, stoner Seth loves to indulge in marijuana in his spare time. When asked by Sony to talk less about weed during a media tour, he famously replied “I don’t think I’m capable of doing that.” This is a man who loves his weed!

Who are your favorite weed-smoking stars? Tell us in the comments below!