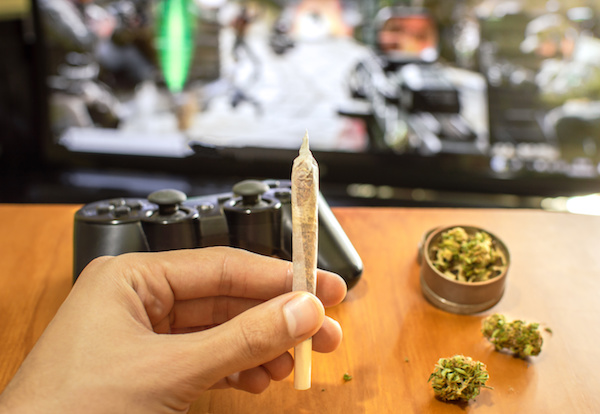 Have you ever played a video game that was so weird you could grasp the concept clear-headed? Yeah, us too! It’s almost as if you need to take some intense bong rips to be able to figure out the irritatingly difficult objective of the game. So, if you can relate to these feels right now, you may be interested in reading along to see which highlighted games we have personally played while high as f***. The best part is if you buy weed online and just received a killer order you can pull it out before you engross your brain with this gaming inspiration! After all, cannabis can be a fabulous companion to pair alongside some of the most vivid games on the market.

Whether you crave the classic or you roll with the age of modernity, it’s safe to say that a couple of generations have indulged in their favorite pass time while playing this iconic, knockout game! So, pick your favorite tactful character, grab some friends and get wonderfully high before aimlessly floating through the air as part of your rhythmic strategy.

If you spend more time fixated on your computer screen rather than playing console-based video games when you smoke, than “Sliter.io” may be the right casual keeper to exclusively gain your intrigue. Controlling your very own worm avatar your mission is to collect multicolored pellets that randomly spawn across your screen space. Also, feel free to eat smaller characters as well, but be careful, as you continue to grow in size, you will become bate for the larger, wormed players. So, whether you’re bored at home, school or… er, work, why not try to eat all the bright orbs you can while also beating your game score?

Many people buy weed online to pair with their love of gaming and if they plan on getting absolutely blitzed before turning on the console, “No Man’s Sky” is a match made in heaven. This mind-bending, survival game is available for both Xbox One and PlayStation 4 and is built for those who enjoy combat, trading, and exploration missions. The player advances by mining for resources to improve their equipment while also buying and selling sources to seek out new materials that can help them make sense of their ecosystem and the planetary systems that surround them. Oh, and they also battle aliens! So, roll your favorite gange, spark that light and see what mystery lies around the Atlas.

Watching the trailer damn near trips us out every time, let alone playing the game. But if you’re someone who’s looking for a stimulating game to play on your PlayStation 4 or Nintendo Switch, consider playing “Everything”. If you have never heard of this trippy simulation, it’s the game that gives you the ability to vastly explore a life-like universe and control the various things that are within it. With everything from large creatures, celestial bodies and planets to microorganisms on the sub-atomic level, you’re the witty, almighty maker that can hit a blunt and start getting creative.